What’s better than a lazy sunday afternoon at my parents’ place, where to hack away a few hours?

Lately joyplots have been all the rage on the nerd part of twitter, thanks to the awesome ggjoy package for R. Joyplots are essentially just a number of stacked overlapping density plots, that look like a mountain ridge, if done right.

I find them usually nice.. and I like the name, that, in case you’re wondering, comes from the art cover of a post-punk masterpiece of the late 70’s, “Unkown Pleasure” by Joy Division.

So I wrote some code to have decent-looking joyplot in python, especially from dataframes. The result is here. I had fun.

Here are some examples.

Though not a great fit for this kind of visualization, we can generate some joyplots with the iris dataset.

By default, joypy.joyplot() will draw joyplot with a density subplot for each numeric column in the dataframe. The density is obtained with the gaussian_kde function of scipy. 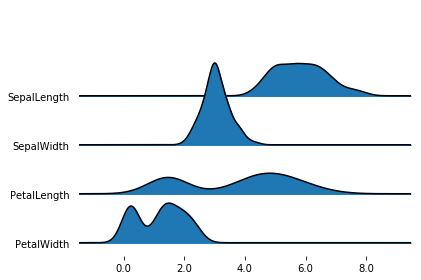 If you pass a grouped dataframe, or if you pass a column name to the by argument, you get a density plot for each value in the grouped column. 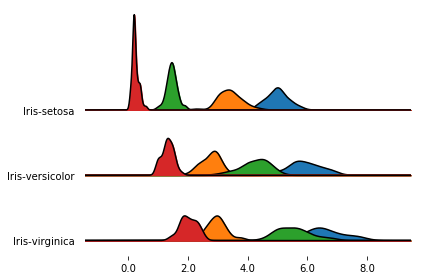 In the previous plot, one subplot had a much larger y extensions than the others. Since, by default, the subplots share the y-limits, the outlier causes all the other subplots to be quite compressed.

We can change this behavior letting each subplot take up the whole y space with ylim='own', as follows. 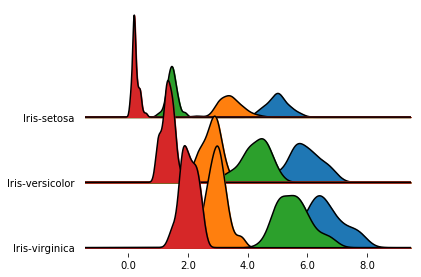 In this case, we achieved more overlap, but the subplots are no longer directly comparable.

Yet another option is to keep the default ylim behavior (i.e., ylim='max'), and simply increase the overlap factor: 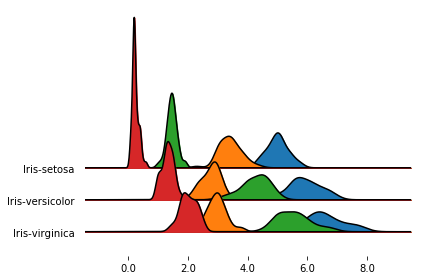 It’s also possible to draw histograms with hist=True, though they don’t look nice when overlapping, so it’s better to set overlap=0.

With grid=True or grid='both' you also get grid lines on both axis. 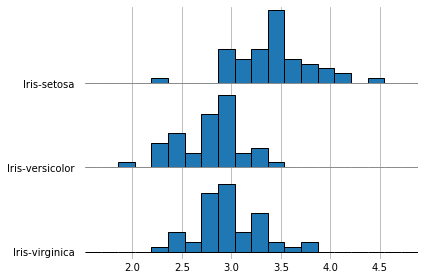 Something that is probably a better fit for joyplots than iris: let’s visualize the distribution of global daily temperatures from 1880 to 2014.

(The original file can be found here)

Since the y label would get pretty crammed if we were to show all the year labels, we first prepare a list where we leave only the multiples of 10.

To reduce the clutter, the option range_style='own' limits the x range of each individual density plot to the range where the density is non-zero (+ an “aestethic” tolerance to avoid cutting the tails too early/abruptly), rather than spanning the whole x axis.

The option colormap=cm.autumn_r provides a colormap to use along the plot.

(Grouping the dataframe and computing the density plots can take a few seconds here.) 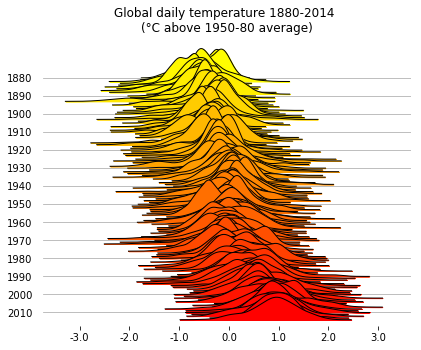 If you want, you can also plot the raw counts, rather than the estimated density. This makes for noisier plots, but it might be preferable in some cases.

With fade=True, the subplots get a progressively larger alpha value. 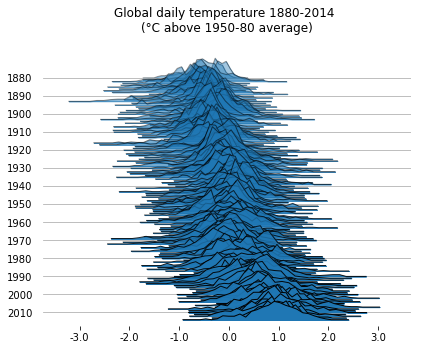 Just for fun, let’s plot the same data as it were on the cover of Unknown Pleasures, the Joy Division’s album where the nickname to this kind of visualization comes from.

No labels/grids, no filling, black background, white lines, and a couple of adjustments just to make it look a bit more like the album cover. 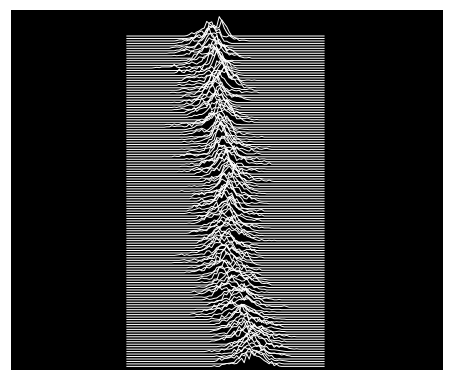 The files can be obtained from Kaggle datasets.

Join the dataframes and filter:

The fraction of 3 pointers attempted by each player in a season has clearly shifted a lot.
In today’s NBA there’s a good number of players who take 40% or more of their shots from behind the line. 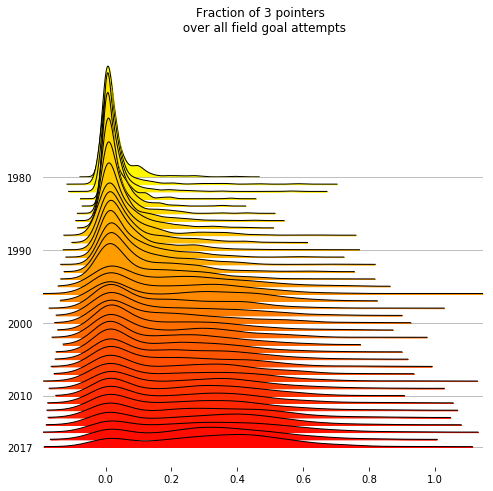 In this last plot, the distributions of the 3P percentages across the players are drawn as raw binned counts.

With kind=normalized_counts, the values are normalized over the occurrences in each year: this is probably needed here, because that the number of teams and players in the NBA has grown during the years.

The median NBA player has become a much better 3P shooter: no big surprise there! 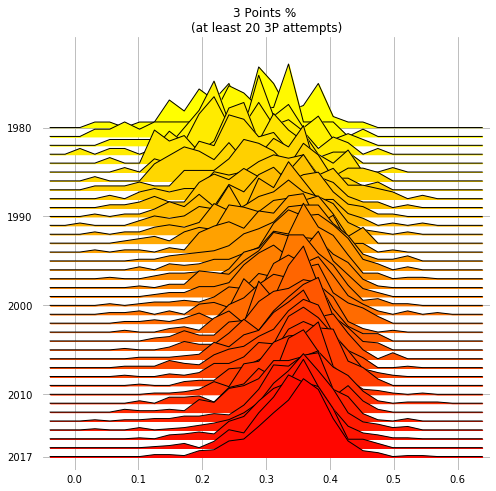